Combining a passion for local produce with the power of social media has taken Sophie Hansen to unexpected heights. Australia’s Rural Woman of the Year speaks to Rosemarie Milsom.

When Deputy Prime Minister Barnaby Joyce announced Sophie Hansen as the national winner of the 2016 Rural Women’s Award, no-one was more surprised than the blogger, cook and local food champion. “I was so nervous and I really and truly didn’t think I would win,” says Sophie, who accepted the award before a crowd of more than 300 industry leaders and MPs at a formal dinner in September. “I’d only ever been to Parliament House once before, for a school excursion. Just meeting the other state finalists was awesome; they’re incredible women.”

Other finalists included Martina Matzner, a Northern Territory mango farmer and NT Farmers board member who is passionate about engaging young people in agriculture; and East Kimberley businesswoman and seed producer Kalyn Fletcher, an advocate for the growth of tropical agriculture. But it was Sophie’s effective use of Instagram, not irrigation, that stood out.

SEE ALSO: A Gourmet Guide to the Best Food and Wine in Orange

The former Sydney journalist’s path to the gala awards night in Canberra had begun five years earlier in the kitchen of her home in Orange, NSW, with the creation of her blog, Local is Lovely. “Initially, I wasn’t sure how what I was doing would fit in with the award and what it stood for. But what I realised as I went through the process is that it’s about recognising the contribution of all kinds of women in rural and regional Australia,” says Sophie, who received a $10,000 bursary, plus $10,000 for being a state winner. “My contribution is just as valid as if I was working on a tractor or as a grazier. I’m making a difference in my own way.”

Sophie’s selection may have seemed unconventional but her vision to create an online social media training program for farmers stood out. The award, overseen by the Rural Industries Research and Development Corporation (RIRDC), recognises leadership and a commitment to rural communities. RIRDC managing director John Harvey believes Sophie’s My Open Kitchen initiative has the potential to educate a large number of people about where their food comes from. “Sophie was selected because of her ability to transform produce, agriculture, rural living, regional growth and development, wrap a story around it and serve it up in a way that people notice,” he says. “She is an amazing storyteller, bringing to life fresh paddock-to-plate produce with amazing photography and words. She’s a brilliant rural ambassador.”

Daunted by the various social media platforms and overwhelmed by the proposition of inviting the world to share their work and way of life, many primary producers are missing out on opportunities to connect with customers and one another, as well as grow their businesses. “You can be so frightfully busy doing the physical work, it’s hard to think about anything else,” says organic garlic producer Libby Morgan, who’s been featured on Sophie’s blog. “You can’t underestimate how helpful Sophie has been in leading the way. She’s been instrumental in getting our food in front of people.”

Says Sophie: “More and more consumers want to know where their food comes from and to connect with the farmers. You see it happening at markets everywhere. If the farmer has a phone in their pocket, they have the tool to connect with customers anywhere. They can tell their story and give their customers updates. People are craving that experience. It can be very powerful.”

Sophie’s foray into paddock-to-plate storytelling began in December 2011 with the launch of Local is Lovely. The combination of wholesome recipes, anecdotes and enticing photographs highlighted the bounty of fresh produce on her doorstep in NSW’s Central West, as well as the committed producers who shared her passion for no-fuss seasonal dishes. “The food I cook is very simple,” she says. “I’m not a trained chef. There are no fancy foams. I want my food to be fresh and tasty. At the markets, we [the producers] were all trading recipes and I was keen to share them with a wider audience.”

She had thought long and hard about using her journalism skills and passion for food to create a blog but it took an afternoon in the kitchen with her two young children for her to finally commit. “The kids were really ratty and I was tired,” recalls the 41-year-old. “We’d had a busy weekend [selling venison] at farmers’ markets in Sydney and Orange and I decided to make it up to them by cooking pikelets. I added some salted caramel sauce I’d made and cut up some fresh local nectarines. I took a photo of my son, Tom – who was a toddler at the time – and was really happy with it so I decided to use the photo and pressed ‘publish’ on my first post.”

She couldn’t have known that Local is Lovely would attract a dedicated following – the Instagram offshoot of her blog has more than 19,000 followers – and lead to the publication in 2014 of a cookbook of the same name. She is also in demand as a cooking teacher and runs workshops at the Farm Kitchen on the family’s grass-fed deer farm, Mandagery Creek. It’s also where she creates recipes and hosts monthly lunches.

We’re sitting at a timber table in the front yard of the 570-hectare farm, having just polished off some of Sophie’s homemade sour-cherry and berry iceblocks. A small flock of raucous sulphur-crested cockatoos interrupts the pretty, peaceful setting on the western side of Mount Canobolas. A pair of brightly coloured king parrots flits between the fruit trees in the small orchard. Sophie’s husband, Tim, and the couple’s children, Alice, nine, and Tom, seven, have headed out to check on some of the farm’s red deer, whose numbers have swelled to 2000 after the recent fawning season.

It was venison that brought the couple together 12 years ago. Tim was promoting his business, Mandagery Creek Venison, to journalists over lunch at a popular Sydney restaurant and Sophie was among the guests. She was writing for Outback magazine but had not long returned from Italy, where she’d worked for three years for Slow Food International on its English website. Her time in Piedmont, Northern Italy, was not without its challenges, including “a horrible, cheap apartment” and the language barrier – she learned to speak Italian fluently. But it had a profound impact.

“I learned about the power of conviviality,” she says. “It’s not about expensive, elitist food and that was my frustration when I came back to Australia. It’s about the pleasure of sharing simple, fresh produce and thinking about where it’s come from. Italians have a strong food culture and they stick to what they know, using seasonal ingredients. Take a bit of time to cook dinner; make it a pleasurable experience. Food should make you happy.”

Sophie and Tim married in 2006. The reception was held at her parents’ property in Rydal, near Lithgow, NSW. Although Sophie was born and raised in Sydney, her parents had always maintained a rural retreat so adjusting to life in the country wasn’t a stretch, though she now has a much deeper understanding of the ups and downs.

“Farming is really hard because you’re running a business with so many variables,” she says. “Rain is like money falling out of the sky and I never realised that before. Or the market changes and the dollar goes up and down. It’s like a gamble sometimes. Friends of ours will put a crop in then cross their fingers that it’s going to rain. If it doesn’t, they don’t get an income that year.”

On the flip side, she says, “It’s very rewarding. We’re caring for this beautiful land and we treat our animals well. We take a lot of pride in that. You can go to bed feeling like you’ve done a really honest day’s work. I like that, even if it makes me sound a bit old-fashioned.”

Sophie’s approach to social media, however, is anything but old-school. In August, she launched a podcast that goes live every Tuesday and includes interviews with farmers, cooks and producers, as well as information about how to use social media to build supportive and engaged communities.

She believes that farmers who feel intimidated by social media need friendly encouragement rather than overwhelming information about algorithms and analytics. “My approach is that none of this stuff is hard but you do have to invest some time in learning it,” she says. “The course is also about how to write a recipe that’s going to showcase your avocados or cherries. And I want it to be fun and social. It’s not too techy.”

When Sophie presented her idea to the awards selection panel, they were interested in the mental health benefits. “It’s lonely and hard being a farmer sometimes but you can have a whole community sitting there in your pocket,” she says. “I appreciate that internet access can be a problem and even I have patchy days but it’s no reason not to do things like this. It just adds to the very strong argument that farmers need good internet access.”

Sophie is also heartened by the growing number of people who are committed to eating locally produced food. “We were picking up some sour cherries from an orchard the other day and there were two women in their twenties there; they’d driven to Orange for the weekend to buy cherries,” says Sophie. “They were going to get some friends together and make jam the next day. How cool is that? Millennials making jam. They’ll Instagram the hell out of it and that’s great!”

While Sophie has enjoyed the summer stone fruit, she is looking forward to the arrival of figs. “I do a carpaccio with the venison. I lightly sear it then slice it thinly and serve it with fresh figs, rocket, Parmesan, chilli and slices of sourdough on the side. That’s my idea of a perfect meal.”

SEE ALSO: Family Farm Stays to Get the Kids Close to Nature 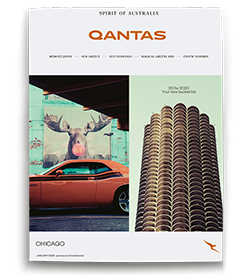