Celebrated chef Nino Zoccali thought he knew Greece like the back of his hand... until he stumbled upon one of the world’s most exciting wine regions.

Yes, like most Greek islands, Kefalonia has cream beaches and blazing sunsets, laid-back tavernas and bougainvillea-framed laneways, steep hills and impossibly blue waters. But it also has something else going for it: it’s one of the most exciting wine regions in Greece, if not the world.

I was so impressed with Kefalonia’s food and wine scene that I decided to go back earlier this year to find inspiration for my next cookbook. I returned to Australia with an embarrassment of riches but I’ve whittled them down to this list of the nine best places to experience the island, relish its wines and taste incredibly good food.

Surrounded by olive groves and lemon trees, Petrakopoulos Winery is an excellent place to kick off your Cephalonion journey. It’s super-boutique, producing just 20,000 bottles each year. All of its wines are made with minimal intervention – bordering on natural – with a large portion of its grapes grown organically. More importantly, Petrakopoulos does wonders with robola, an indigenous Greek white wine variety and the jewel in Kefalonia’s crown. During our stopover, we tasted three robolas in the winery’s tiny courtyard – their floral notes and citrus accents the perfect foil for a crisp blue cloudless sky.

If the drive to Robola Cooperative of Kefalonia (Omala 28100; +30 267 108 6301) – all sloping hills and winding roads – doesn’t leave you speechless, the scale of this behemoth producer (the largest on the island) will. Here, grapes from more than 300 producers are turned into half a million bottles of wine each year. But don’t let the volume deter you. Located in the scenic Omala Valley, the winery sits beside the architecturally magnificent Monastery of Saint Gerasimos (the patron saint of the island), complete with an elegant beige façade, arched windows and rust-red domes. Explore this religious monument dating back to the late 16th century then kick back in the winery proper to taste a few more robolas. Many of the vineyards here are still monastery-owned, adding another layer of intrigue to an already fascinating destination.

You could easily while away hours exploring the serene gardens and whispering olive groves of Gentilini, a glass of robola in hand. But visiting this winery, a short drive from the coast-hugging town of Argostoli, is also an opportunity to taste mavrodaphne – the other indigenous variety carving a niche for itself in Greece and beyond. Accompanying the tastings is a mezze board featuring local cheeses, fresh bread and Gentilini’s own award-winning extra virgin olive oil.

The find of my trip has to be Haritatos (Kladata, Lixouri 28200; +30 697 344 6352), where only five years ago three siblings – Ioanna Haritatou and her brothers, Costas and Haritos – decided, at a relatively late stage of life, to unite and take their grape-producing skills one step further, making wines on their family-owned property. In an area called Monopolata, the house itself is worth the visit. It was built in 1863 and has family ties tracing back to 1370, when the island was under Venetian rule. It feels like a trip back in time, with a stunning historic Mediterranean villa, nut and fruit orchards and a private Orthodox church. Ioanna, a former diplomat, Costas, who’s just returned from 20 years in Rome, and Haritos, a former pharmacist, have rejuvenated their fully functioning 48-hectare farm, a key pillar of which is the vineyard that produces moscato, mavrodaphne and vostilidi.

The best places to eat

Not far up the road from the Robola Cooperative is the perfect spot for lunch. Mpotsolos (Eparchiaki Odos Mousaton, Valsamaton 28100; +30 267 108 6155) is a quaint little diner serving some of the most delicious lamb I’ve ever tasted. (Apart from robola, this area is well known for its lamb and this classic taverna does it beautifully.) The atmosphere in the dining room – with exposed stone walls and checked tablecloths – is absolutely enchanting but if the sun is smiling, nab a spot under the ageing olive tree out the front and soak up the Ionion vibe.

If you’re after an unbeatable view of the sunset, make your way to Avithos Preview. Located on the beach of Avithos, it overlooks a small triangular bay with the bluest of blue water. Operated by Panos Sarris, a sommelier whose mum tosses the pans in the kitchen, the taverna celebrates traditional Kefalonian cuisine, with local cheeses, fresh fish and a delectable selection of mezze. The ingredients are first-
class, including their own estate-grown extra virgin olive oil, Panochori, which was awarded a silver medal at the Athena International Olive Oil Competition in Athens in 2016 and was this year listed among the top 500 extra virgin olive oils in the world. The food is perfect with a glass or two from Sarris’ nearby eponymously named winery, where only 8000 bottles are produced each year, all wild fermented. Tastings can be booked at the winery by appointment but with the full range available in the restaurant and the super-knowledgeable Sarris pouring, there isn’t much incentive to move.

Sushi might sound like a controversial choice on a Greek island awash with tavernas but it goes splendidly with robola. No wonder locals have happily embraced it. And so should you at Sepia (Agiou Gerasimou 8, Argostolion 281000; +30 267 102 2011). With black-and-white checkered floors, timber tables and fine cutlery, this is a contemporary space amid Kefhalonia’s timeless landscape and a wonderful place to sample the island’s ocean-fresh seafood. Tuna tartare, anyone?

No trip to Kefalonia is complete without a day of sightseeing. A drive from the coastal town of Lixouri to Myrtos Bay truly captures the magnificence of this island, with striking vistas at every turn – an idyllic cove here, a spotless white beach there. Wend your way through the lush mountains before arriving at the bay, where limestone cliffs plunge into the sea. A few minutes’ away is Assos, a pretty seaside village straight from a painter’s canvas. And if you want more, drive all the way to Fiscardo, a former fishing village at the northernmost tip, now incredibly cosmopolitan thanks to its clutch of cool restaurants, tavernas and cafés.

Located on the south-eastern coast of the island, White Rocks is a luxury hotel with its own private beach. There are 162 rooms, suites and bungalows to choose from, each with contemporary interiors, comfortable beds, plush robes and gleaming ensuites. There are two excellent restaurants on site – the sea-facing Lungomare has an à la carte menu and The Dining Room is the buffet option – plus four bars. But the big drawcard is the freshwater pool overlooking the beach.

The author, Nino Zoccali enjoying a glass of Kefalonia's finest

Still thirsty? Here are 10 other regions with exceptional wines and stunning scenery

SEE ALSO: Which Greek Island is for You?

Why Exploring Greece by Boat is a Bucket-List Trip
Greece

Why Exploring Greece by Boat is a Bucket-List Trip

A First-timer’s Guide to Santorini
Greece

A First-timer’s Guide to Santorini

Which Dreamy Santorini Hotel Should You Stay At?
Greece

Which Dreamy Santorini Hotel Should You Stay At?

How Melbourne Restaurant Attica Started 2 New Businesses in a Week

From Feature Films to PPE: How One Business Transformed to Help Healthcare Workers 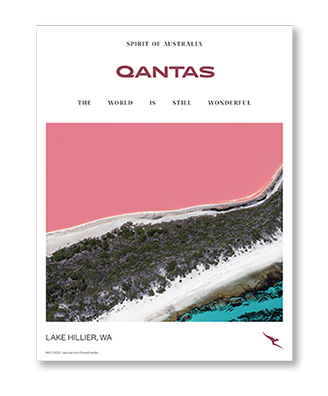 Read the May issue of Qantas magazine here