Our local experts would fight over the last muffuletta sandwich at A1 Canteen then bury the hatchet over sunset cocktails at Bennelong.

Is there a restaurant that nails  the Sydney vibe?

PG: It would have to be  Icebergs. It’s all about the location – above Bondi Beach with that view. You can’t get much more Sydney than that. The  menu changes often but  it’s always about really  clean, high-quality food, especially seafood.

PG: Quay (pictured above). It’s my restaurant so I’m going to be biased. We have an incredible view of the harbour and the food has to be beautiful to draw diners’ attention away from that outlook. It’s an all-round experience.

AH: I’d say Momofuku Seiōbo (pictured top) at The Star in Pyrmont. Chef  Paul Carmichael draws on  his homeland of Barbados, with an inventive use of  fruit and fish adapted to the ingredients found here. It’s  the most finger-licking fine dining on the planet. There’s not a better dish in Australia than a fish head charred over coals served with hot sauce and busted roti.

PG: Momofuku Seiōbo. Paul Carmichael’s food is so good but if you don’t want to go  the full tasting menu there’s  a bar area where he does sensational snacks. You can just pop in there without  a reservation – it’s small so  you have to be lucky but  it’s worth it.

AH: Poly in Surry Hills is  a wine bar that doesn’t want  to be a restaurant but you can treat it like one because the food’s that great. The drinks  list is global, with a huge variety of natural wines,  and the food is outstanding. The blood sausage pie with  hot mustard and baby herbs  is unreal.

What’s your pick for the best  food with a view?

PG: It would have to be Bennelong at the Opera House. We’re so lucky to have two restaurants [Bennelong and Quay] that overlook the harbour.

AH: We’re pretty spoilt in Sydney but at Bennelong you get a perspective of the city that you don’t see from any other restaurant. You get  the water plus – as the sun  is disappearing – a striking silhouette of the city.

PG: I like what my friend Clayton Wells is doing at  A1 Canteen (pictured above) in Chippendale. He’s  a great chef. He does this amazing sandwich – a sort  of muffuletta stacked with ingredients, including provolone. It’s delicious.

AH: A1 Canteen is the casual eatery the city was lacking. There are stellar drinks and absolute knockout food for not much money. I’ve not found better scrambled eggs in Sydney and there are killer sandwiches, too – led by the epic muffuletta, where olive salad, mortadella, provolone, salami, artichoke and more are layered in a soft roll.

Who does the best coffee?

PG: Single O (pictured above). We use their coffee in our restaurants and I’m addicted to the flavour. If I’m out and about in Surry Hills, that’s where I’ll head. I take a single- shot flat white but only half the quantity of milk.

AH: Neighbourhood (16b Buckingham Street, Surry Hills). The owner, Anthony Svilicich, has won a string of awards and he cares about every step. He’s selective  about what roaster he deals with, what roast it is and exactly how a medium or  light roast should be drunk, without getting too nerdy  or forceful about it. He makes every cup taste really good  but it’s not pretentious or showing off; it’s just about enjoying the coffee.

What about top pub food?

PG: Queen Chow (pictured above) in Enmore. I live on the north side of Sydney and  I drive all the way over there  [across the Harbour Bridge  to Queens Hotel in Sydney’s Inner West] on a Sunday to  eat their dumplings. Going  out for yum cha is a tradition in our family and the quality of ingredients at Queen Chow  is just so good, as is the care taken and the attention  to detail.

AH: I love the Paddo Inn for its quality and simplicity. You don’t get too much on the plate – a steak, a lemon  cheek, a garnish and a side  of chips – but it ticks so many boxes for me. It’s just really good cookery and, for a pub,  it’s bang-on.

Where’s the best spot for a CBD working lunch?

PG: Mr. Wong (pictured above). For a business lunch, you want to be in the heart of the city with really good food that comes out fast. It’s a big restaurant but it has a great atmosphere and the service  is always very good. Their roast meats, especially the duck, are always excellent.

AH: Probably The Bridge Room in the city. If you want something a bit intimate without a grand, epic dining room, this is it. It’s about world-class ingredients and chef Ross Lusted has sunlight in his food – I can’t think of another way to describe it. The menu is fresh and light and beautiful.

Is there a fantastic restaurant  no-one knows about?

PG: It’s another place that does amazing dumplings – a little hole-in-the-wall called Lotus Dumpling Bar (pictured above) down on Hickson Road [in Dawes Point]. Their scallop dumplings are just gorgeous – packed full of scallop – and the spring onion pancake is also really delicious.

AH: That would be Pino’s Vino  e Cucina in a little backstreet  in Alexandria. You walk  inside and it feels almost  like an Austrian tavern –  lots of timber and a big wooden bar you can sit at  and drink. But it’s an Italian trattoria with wonderful  food, a cracking wine list  and first-rate cocktails.

SEE ALSO: Where to Find the Best Tapas in Sydney

Fly High on This Virtual Tour Above Sydney Harbour
Sydney

Fly High on This Virtual Tour Above Sydney Harbour

Nomad up the Road – Restaurant Review 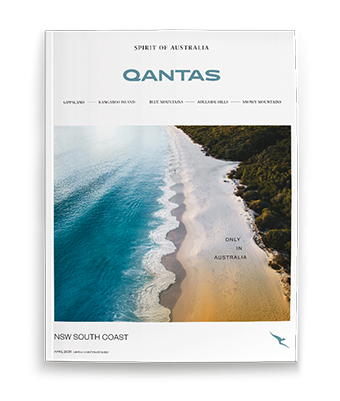